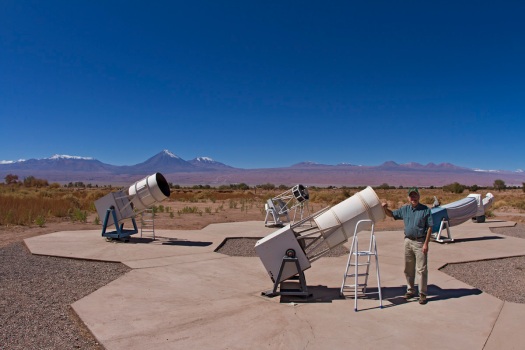 Welcome to paradise for astronomers! Yesterday I arrived at the Atacama Lodge near the little resort town of San Pedro de Atacama in central Chile. As you can see, we’re at the base of the Andes and some very impressive volcanoes. The next week promises outstanding skies and night after night of non-stop shooting and sightseeing of southern sky splendours. And yes, the sky really is that blue!

I’m with a small group of three other fellow Canadian stargazers and we’ve met up with three other fellows from Québec who’ve been here a few nights already. So we’re told we’re the largest gathering of Canadians in this part of Chile! My group arrived yesterday evening after 24 hours of travel, the worst of which was the hour shopping for groceries at the superstore in Calama. It was the day before a national holiday, and the crowds were worse than Xmas eve back home.

But we’re settled in now, and all the equipment arrived unscathed and is ready to go. The scopes I’m posing with are ones that live on site for the public tours conducted by Alain and Ale Maury, owners of the Lodge. We had a great evening last night of binocular viewing but tonight we’ll be ready to go with our own gear all set up, plus an 18-inch we’ll be using for the week.

There is no finer place on the planet for astronomy. Watch for more photos coming soon!

3 Replies to “Under Chilean Skies”