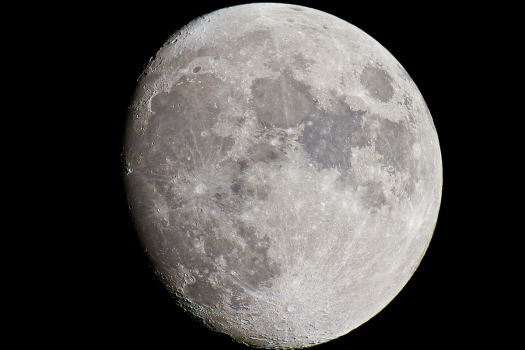 On one of the few clear nights of late I took the opportunity to shoot the Moon. It’s a familiar subject to be sure, but one I don’t shoot very often. Pity really, as it is rich in detail and makes for dramatic photos.

I took this shot June 12, about 4 days before the Full Moon of June, so this is a waxing gibbous Moon. Lots of terrain (lunain?) shows up at left along the terminator, including the wonderful semi-circular bay at about 10 o’clock called Sinus Iridum. At the bottom is the bright Tycho crater, with its distinctive splash of rays spreading out across most of globe. Imagine the devastating impact that caused that feature! It isn’t that old either — estimates suggest Tycho is just 100 million years old, putting its formation smack dab in the middle of the Cretaceous Period when dinosaurs ruled the Earth. They would have seen that impact, little knowing another similar-sized impact 35 million years hence, but aimed at Earth, would do them in.

For this shot I used the Astro-Physics 130mm apo refractor with a 2x Barlow lens to increase the effective focal length to 1600mm, a combo that exactly fills the frame of the Canon 7D with no room to spare. I processed this image for high contrast, to bring out the subtle tonal and colour variations in the dark lunar seas, an effect due to different mineral content of the lava that oozed out forming the lunar plains. Judicious use of Highlight Recovery (in Camera Raw) and Shadows and Highlights (in Photoshop) brings out the detail across a subject with a huge dynamic range in brightness. A liberal application of Smart Sharpening also helps snap up detail.

One Reply to “The Moon in June”