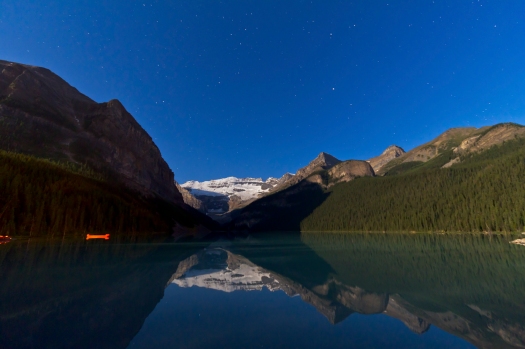 This has to be one of the most photogenic and photographed places in the world. Here it is in a different light, moonlight.

This is Lake Louise, in Banff National Park, Alberta. A few hours before I took this photo on Saturday, August 13, where I stood would have been swarming with thousands of people. But at midnight there was no one about. I had the view to myself.

This looks like a daytime shot, except the stars give it away. Instead, it is the Full Moon, behind the camera, providing the illumination. Contrary to Hollywood lighting clichés, moonlight is not blue. It is the same colour as sunlight, because it is sunlight, just much fainter, reflected off the Moon’s neutral grey surface.

In this view we are looking southwest, toward the stars of the summer sky setting behind the peaks of the continental divide. Arcturus is the bright star at right.

This is one frame of 477 30-second exposures I took over 4 hours, of the stars turning and eventually clouds blowing in across the sky from the icefields over the divide. It’s rare to get such a perfectly clear night in the Rockies. It was a wonderful to be there, and apparently to be the only one there, to experience it.

One Reply to “Lake Louise by Moonlight”