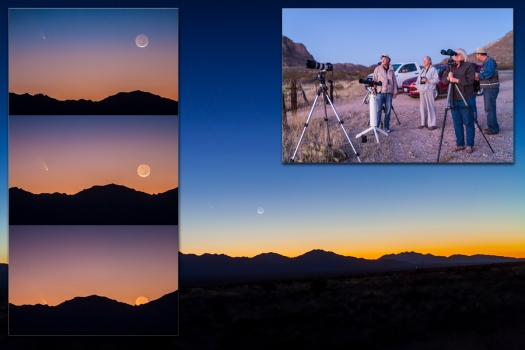 Sometimes the best sky experiences just happen spontaneously. This was one of them – a night of the comet on a desert highway.

This was the scene at our impromptu roadside star party last night, north of the Painted Pony Resort in southwest New Mexico. About a dozen of us, mostly Canadians, gathered at a highway pull off to watch the unforgettable sight of the waxing crescent Moon setting alongside Comet PANSTARRS. You can see the comet to the left of the Moon in the background wide-field image, more or less as it appeared to the naked eye. But the real treat was the view through binoculars and my own small 80mm telescope. The series of closeups with a telephoto lens captures that view.

It was amazing to watch the comet tail and dark side of the Moon setting together as the last bits to disappear behind the mountains. All the while the winter stars and Milky Way were appearing overhead in a perfect sky, all on a mild desert night. A stunning astronomical experience.

2 Replies to “Night of the Comet on a Desert Highway”