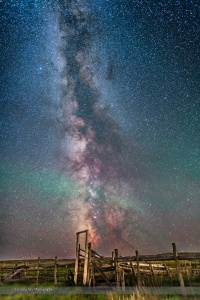 The Milky Way shines behind the rustic corral of the 76 Ranch in Grasslands National Park.

It’s not a gunfight at the OK Corral, but starlight at the 76 Ranch Corral. I shot this Tuesday night in the Frenchman River valley in Saskatchewan’s Grasslands National Park.

The scene captures the summer Milky Way, some green bands of airglow, and the old corral lit by starlight and some aurora beginning to brighten to the north.

Some occasional flashes of distant spotlights from down the valley also provide foreground illumination. The lights came from ferret spotters out at night checking on the nocturnal black-footed ferret.

The corral once belonged to the 76 Ranch, one of the largest in Canada in its day and owned by Sir John Lister-Kaye, one of many upper class Brits who came to Canada in the 1880s to make their fortune in the newly opened range lands — until drought and hard winters of the southern Prairies forced them to sell out and break up their once huge land holdings.

This image is a composite, but of five frames all shot at the same place in quick succession. I did not fake the sky into a foreground shot at some other time and place.

Four shots are tracked, to follow the sky for pinpoint stars. I used the new Sky-Watcher Star Adventurer tracker.

For one shot at the end of the sequence I turned the tracker’s drive off to take a single sharp image of the foreground.

Using masking in Photoshop I removed the blurry foreground from the sky images and the blurry trailed sky from the ground image.

One Reply to “Starlight at the Old Corral”