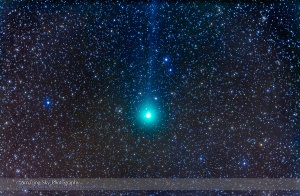 Comet Lovejoy has migrated from the southern sky to appear in our northern sky for the holiday season.

This was Comet Lovejoy, aka C/2014 Q2, as it appeared on Tuesday night, December 23. It was low in the south well below Orion in the constellation of Columba the dove. It was easy to see in binoculars as a 5th magnitude fuzzy star. My long exposure photo reveals its thin blue ion tail.

I could just see the comet naked eye, knowing exactly where to look. However, I’m at 32° North latitude, placing the comet now decently high in my New Mexico sky.

The comet was discovered by Australian amateur astronomer Terry Lovejoy last August when the comet was way down under in the southern sky. But it is now moving rapidly north and brightening, bringing northern observers a binocular comet for the holidays.

However, the Moon is now coming up and will interfere with viewing later in the week. However, in mid-January Comet Lovejoy will be very high in the sky as its moves through Taurus, with the Moon out of the way.

By then the comet may be brighter and a naked eye object from dark sites. But don’t expect it to be anything more than a fuzzy star. This comet never gets close to the Sun, so isn’t likely to grow a bright dust tail.