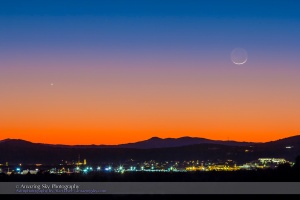 The thin Moon and Venus hang over the lights of Silver City, New Mexico.

Tonight, December 22, the 24-hour-old crescent Moon shone a binocular field to the right of brilliant Venus. I caught both hanging in the sky over downtown Silver City, set in stunningly clear twilight.

Venus is just beginning what promises to be a spectacular evening appearance in the western sky over the next few months, as it climbs higher.

The Moon, on its shorter cycle around the sky, is emerging into the evening sky for the end-of-year holidays. Watch it wax into a quarter Moon, then to Full, over the next two weeks. Tonight, the glow of Earthshine was prominent lighting the dark side of the Moon.

I shot this from east of the city, using a 135mm telephoto on my Canon 60Da camera.

Happy holidays to all!

5 Replies to “Venus and a Silvery Moon over Silver City”