The summer Milky Way shines over the Milk River and the sandstone formations of Writing-on-Stone Provincial Park.

Earlier this week I spent two nights shooting at a favourite site in southern Alberta, near the U.S. border. Here, the Milk River winds through a small canyon and coulees lined with eroded sandstone formations called hoodoos. Carved on those hoodoos are ancient graffiti – petroglyphs dating back hundreds of years recording life on the plains. Thus the name: Writing-on-Stone.

It’s a beautiful place, especially so at night. I was there to shoot video scenes for an upcoming “How to Photograph the Milky Way” tutorial. And to collect images for the tutorial.

Above is a shot that is one frame from a time-lapse sequence, one that captures a meteor and the Milky Way over the Milk River, with the Sweetgrass Hills of Montana in the distance.

This image is from a set of exposures I took with the camera and ultra-wide 15mm lens tracking the turning sky, to prevent the stars from trailing in long exposures. A set of images with the tracker motor turned off supplied the sharp ground.

It shows the sweep of the summer Milky Way, with some clouds and forest fire smoke intruding to the south.

In both images the ground is green because, in part, it is being lit by an aurora display going on behind the camera to the north. 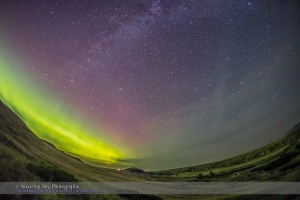 Here’s the view looking east, with a green aurora fringed with red lighting the northern sky.

The display on the night of July 22/23 formed a classic arc across the north. This was my panoramic view of the vast auroral oval that was wrapping around the planet at far northern latitudes. Here, I was at 49° north, almost on the Canada-U.S. border, and well south of the main oval.

In all, it was a magical two nights at a scenic and sacred site.