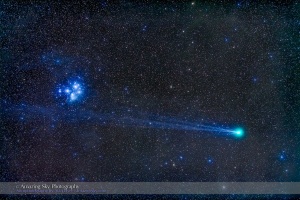 Sunday, January 18 was the night to catch the ever-photogenic Comet Lovejoy at its best and closest to the Seven Sisters, the Pleiades. Its long blue ion tail stretched back past the Pleiades.

I thought the tail would be passing right over the star cluster, but not so. At least not when I was shooting it at about 7:30 pm MST.

Still, the combination made a fine pairing of cosmic blue objects for the camera. The top image is with a 135mm telephoto. 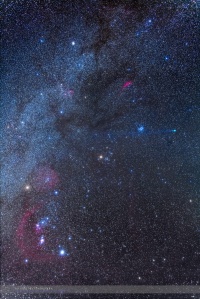 This wide-angle image, with a 24mm lens, takes in many of the northern winter constellations, from Orion at bottom, to Auriga at top, with Taurus in the middle. Notice the dark tendrils of the Taurus Dark Clouds.

At right, beside the Pleiades, is the green and blue comet, with its tail reaching back past the Pleiades.

I shot both images from the dark skies of City of Rocks State Park, New Mexico, which has proven to be one of the finest places on the planet for watching Lovejoy!