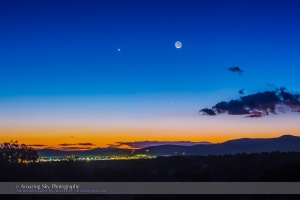 This was the scene on Wednesday night, as the waxing Moon formed a triangle with Mercury and Venus.

Skies cleared nicely this evening, providing a beautiful view and photogenic scene of the inner planets near the waxing Moon.

On January 21 the crescent Moon appeared with Venus (at left) and Mercury (below), and with the trio above the lights of Silver City, New Mexico.

Compare this view of reality with the graphic from my blog of a few days ago, and with a similar scene a month earlier with the Moon closer to Venus but with no Mercury.

With the Moon now returning to the sky, sighting Comet Lovejoy will become more difficult.

On Thursday night, January 22, the Moon will be higher and shine near Mars.

Something very special is going to happen on Jupiter this Friday night.

If you have a telescope be sure to train it on Jupiter Friday evening or into Saturday morning for a rare sight. For 24 minutes we will see three of Jupiter’s moons casting their shadows onto Jupiter’s cloud tops at once.

The shadows of the Jovian moons Io, Europa and Callisto will be on the disk of Jupiter from:

For those in western North America the times are:

It is short-lived, however. The fast-moving shadow of Io leaves the disk 24 minutes later, at 1:52 a.m. EST, or 11:52 p.m. MST, leaving only the shadows of Callisto and Europa on the disk. (The graphic illustrates the triple transit halfway through the 24-minute-long window.)

You’ll need a telescope to witness this rare dance of shadows. An 80mm refractor or 100mm reflector should suffice. Use high power. The shadows will appear as dark spots of varying size and intensity. Io’s will be darkest, Callisto’s will be largest but less intense. Europa’s shadow will look the smallest.

The disks of Io and Callisto will also be on the disk but will appear as bright dots, making them harder to pick out against the bright cloud bands.

Jupiter is the brightest object in the eastern sky in the late evening. You can’t miss it!