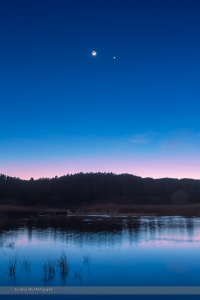 The Moon meets Venus over a New Mexico pond in the heart of the Apache homelands.

This was the scene on Sunday evening, March 22, 2015, as the waxing crescent Moon appeared near Venus in one of the best conjunctions of the spring.

Earthshine lights the dark side of the Moon, while Mars also appears, below the Moon-Venus pair.

For these images I set up on the picturesque grounds of a resort called the Inn of the Mountain Gods, near Ruidoso, New Mexico, a ski resort in winter and a cool mountain retreat in summer.

The resort, run by and on land owned by the Mescalero Apache, honours the spirits of the four sacred mountains on Apache land: Sierra Blanca, Guadalupe Mountains, Three Sisters Mountain and Oscura Mountain Peak.

As the resort brochure states, “These four mountains represent the direction of everyday life for our Apache people. Our grandparents would often speak of the place called White Mountain. It was there that the creator gave us life and it is a special place.”

I shot this image a little later in the evening when the sky was darker, stars were beginning to appear, and thin clouds added haloes around the waxing Moon and Venus. I think the clouds added a photogenic touch.