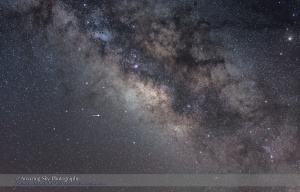 It’s a nova needle in a Milky Way haystack – an exploding star appears in Sagittarius.

On March 15 a very observant amateur astronomer in Australia spotted a star in Sagittarius that wasn’t there the night before. It was a nova, Latin for “new.”

But this was not a new star forming, but an old star in the process of dying.

This star is likely an ancient white dwarf drawing material off a close companion. When the in-falling material builds up on the surface of the white dwarf it ignites in a nuclear explosion, causing the star to brighten, in this case by hundreds of times.

At its peak last week, Nova Sagittarii was just bright enough to see naked eye. It is now below 5th magnitude and barely naked eye. In my long exposure photo it appears lost amid the blaze of stars in the Sagittarius Milky Way.

Still, this was the brightest nova visible from the northern hemisphere in many years. Indeed, we haven’t had a really bright naked-eye nova since the 1970s.

Considering all those stars, you’d think some would blow up for us to enjoy!