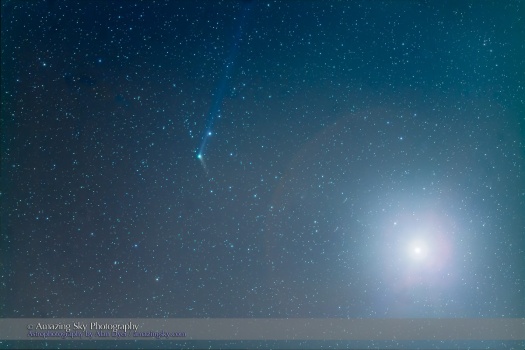 Comet Catalina sports two tails as it moves past Venus in the dawn sky.

This was the view this morning, December 9, from my site in Arizona, of Comet Catalina near Venus in the dawn sky. This is a telephoto lens shot that provides a view similar in size to what binoculars show.

The ion tail points away from the Sun, while the dust tail extends along the comet’s orbit, showing where the comet has been.

The view, both visually and photographically, of the comet will improve as it climbs higher into the eastern morning sky and as it moves away from the glare of Venus. The Moon is also now gone from the dawn, at least for the next couple of weeks.

The comet is dimmer than expected but should at least maintain this brightness for the next month or so.

This is a stack of 5 x 90-second exposures, taken with the 135mm telephoto and 1.4x extender for a focal length of 190mm, at f/2.8 and with the Canon 5D MkII at ISO 1600, tracked on the iOptron Sky-Tracker. Two other exposures, of 15s and 1s, were blended in with luminosity masks to reduce the glare of Venus to a smaller size.

2 Replies to “Venus and the Comet”