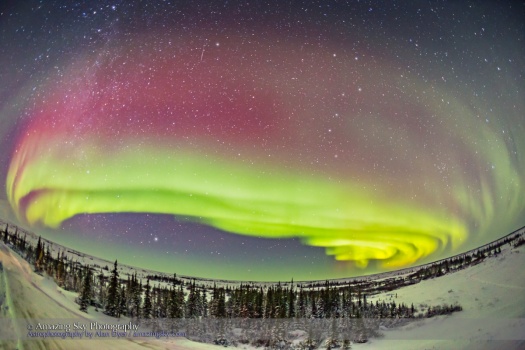 From Churchill, Manitoba the Northern Lights dance almost every night over the boreal forest.

This year, as in the last two years, I have traveled to the shores of a frozen Hudson Bay and to the town of Churchill, Manitoba to view and photograph the aurora borealis.

I’m instructing two tour groups at the Churchill Northern Studies Centre, one this week and one last week, in the science and sagas of the aurora and on how to shoot the Lights. The participants in the groups are fabulous, keenly interested and unfazed by the cold and wind.

From Churchill’s latitude of 58° N, we are under the main auroral oval almost every night. Even on nights with low official activity levels, as they were on all the nights I shot these images, we still get sky-filling displays.

Here’s a selection of still images from the last week of shooting, with clear skies on all but a couple of nights. There’s still room in our March sessions!

2 Replies to “Scenes from Under the Auroral Oval”