A bubble of glowing gas blows away from an ancient dying star, next to a cluster of new stars in Gemini.

This image, from a week ago, captures contrasting stages in the life of a star.

At left is a crescent-shaped bubble of gas called IC 443, or the Jellyfish Nebula, billowing away from the site of an ancient supernova explosion, when a giant star ended its life in a blast thousands of years ago. Estimates put its age as between 3,000 and 30,000 years.

At upper right is the bright open star cluster, Messier 35, a gathering of hundreds of comparatively new stars at the beginning of their lives. M35 lies 2,800 light years away, close enough that its stars are nicely resolved in my photo and in any small telescope. M35 is one of the showpieces of the winter northern sky.

Just below M35 you can see a fuzzy glow. It’s another star cluster, NGC 2158. However, its great distance of 11,000 light years makes it appear as a small, partially-resolved glow, a nice contrast in clusters near and far. 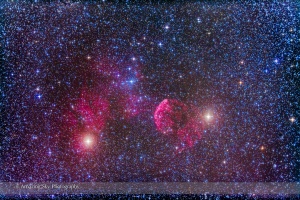 This image focuses on IC 443, sitting between the stars Eta (right) and Mu Geminorum. The field is filled with other faint nebulosity, all part of the cycle of star birth and death. 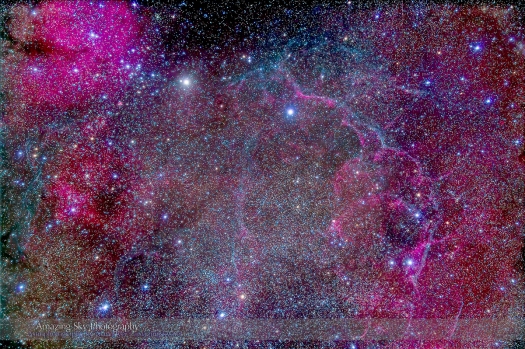 This is what’s left of a star that exploded in ancient times.

This is the Vela Supernova Remnant, an object in the southern sky in the constellation of Vela the Sail. The wispy tendrils of magenta and cyan are all that’s left of the outer layers of giant star that exploded about 12,000 years ago.

Cluttering the field at left are amorphous patches of star-forming nebulosity that are part of the much larger Gum Nebula complex.

The supernova was only about 800 light years away so it would have been a brilliant sight in the sky to neolithic observers, far outshining any other stars. But no record exists of anyone seeing it.

The star didn’t destroy itself completely – its core collapsed to form a pulsar, an ultra-dense ball of neutrons, in this case spinning about 11 times a second. The pulsar is in this field but it’s much too faint to show up in visible light.

I shot this earlier this month from Australia where Vela sails directly overhead. The field is about 6° by 4°, the amount of sky framed by high power binoculars. The brighter parts of the Vela Remnant can be picked out in large amateur telescopes – I’ve seen bits of it in my 10-inch telescope – but this is certainly a challenging object to see, even with aided eyes.

This one image frames examples of both the beginning and end points of a star’s life.

I shot this last night, February 6, 2013, capturing a field in the constellation of Gemini the twins. At upper right is the showpiece star cluster known as Messier 35. It’s a collection of fairly young stars still hanging around together after forming from a cloud of interstellar gas tens of millions of years ago. M35 lies about 2,800 light years from Earth, on the other side of the spiral arm we live in. Just below M35 you can see another smaller and denser cluster. That’s NGC 2158, about five times farther away from us, thus its smaller apparent size. Both are objects that represent the early stages of a star’s life.

At lower left is an object known as the Jellyfish Nebula, for obvious reasons. The official name is IC 443. It’s the expanding remains of a star that blew up as a supernova anywhere from 3,000 to 30,000 years ago. What’s left of the star’s core can still be detected as a spinning neutron star. You need a radio telescope to see that object, but the blasted remains of the star’s outer layers can be seen through a large backyard telescope as a shell of gas. It is expanding into the space between stars – the interstellar medium – ploughing into other gas clouds. The shockwave from its collision with other nebulas may trigger those clouds to collapse and form clusters of new stars. And so it goes in the Galaxy.

For this portrait of stellar lifestyles, I used a 92mm apochromatic refractor and a new Canon 6D camera, one that has had its sensor filter modified to accept a greater range of deep red light emitted by hydrogen nebulas. The image is actually a stack of 12 exposures with an accumulated exposure time of 80 minutes.

Amid a maze of glowing nebulas sits a tracery of magenta and cyan that was once a star.

This image takes in the Vela Supernova Remnant. You can see it as the lacework of gas in the centre of the field. Oddly enough, it sits in the middle of the vast Gum Nebula, the subject of my previous post, an object also thought to be a supernova remnant but one much older and closer. The Vela Supernova Remnant here likely comes from a supergiant star that exploded about 10,000 years ago. It, too, would have been quite a sight to the earliest of civilizations.

The field in the southern constellation of Vela also contains many other classic red and pink nebulas, but ones that are forming new stars, not the remains of dead ones. Most carry designations from astronomer Colin Gum’s catalog from the 1950s and have no numbers from the more familiar NGC or IC catalogs amateur stargazers refer to in their scanning of the skies. Yet, these Gum nebulas show up easily in photos.

I used a 135mm telephoto lens to take this image and it encompasses a field similar to what binoculars would frame. Except, it takes long exposure photos to show these nebulas. I looked last night at the Vela SNR with my 25cm reflector telescope and could just barely see the main arc of nebulosity as a grey ghost in the eyepiece. And that was under perfect dark Australian sky conditions.

The southern sky contains what must be the largest nebula in our sky, a giant bubble spanning a wide swath of the Milky Way.

This is the object known as the Gum Nebula. You can see it in my previous post, in the ultrawide view of the southern sky. Here I’m framing it with a normal 50mm lens that covers about 50° of sky. The Gum Nebula is completely invisible to the eye and shows up only on photos. It wasn’t even discovered until the 1950s, by Australian astronomer Colin Gum. It is #12 in his catalog of southern sky nebulas. I’ve always thought this was an example of an interstellar bubble, blown by intense winds from hot blue stars, of which there are many in this part of the Milky Way in Vela and Puppis. At left are the four stars of the False Cross in Carina and Vela.

But some sources claim this is a supernova remnant, the blasted remains of a star that blew up 1 to 2 million years ago. It is big because it is close by, just 450 to 1500 light years away depending on what side if the remnant you measure. If that’s the case, the star that exploded would have been quite a shadow-casting sight in our prehistoric sky, assuming it was that close to us when it blew up and was in the night sky at the time.

Either way, it is a great target for amateur photographers, and now with digital cameras it is easy to record. This night, some haze moving through added the photogenic glows around all the stars to bring out their colours.

This is the graveyard of where a star died at the dawn of civilization.

The Veil Nebula, made of several fragments, is the remains of a star that exploded as a supernova some 5000 to 8000 years ago. With a telescope you can see this deep sky wonder high overhead these nights, in Cygnus the swan. A decent sized telescope, say 15 to 25cm diameter, can show a lot of the detail recorded here, but only in black-and-white. It takes a photo to pick up the magentas, from glowing hydrogen, and cyans, from oxygen being excited into shining by the shockwave created as the expanding cloud ploughs into the surrounding interstellar gas.

The whole complex is called the Veil Nebula but the segment at right passing through the star 52 Cygni is called the Witch’s Broom Nebula.

I shot this from home a couple of nights ago during a continuing run of typically fine fall weather, which usually brings the best nights of the year for astronomy. For this shot I used a new Lunt 80mm apochromatic refractor on loan for testing. It works very well! This is a stack of five 15-minute exposures.