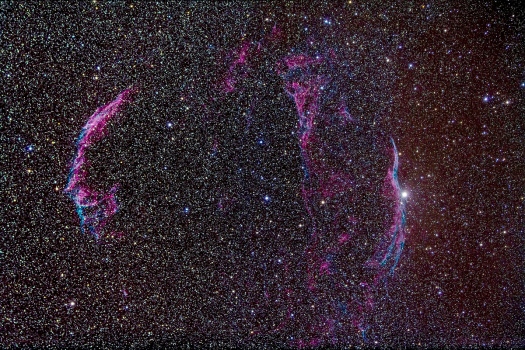 This is the graveyard of where a star died at the dawn of civilization.

The Veil Nebula, made of several fragments, is the remains of a star that exploded as a supernova some 5000 to 8000 years ago. With a telescope you can see this deep sky wonder high overhead these nights, in Cygnus the swan. A decent sized telescope, say 15 to 25cm diameter, can show a lot of the detail recorded here, but only in black-and-white. It takes a photo to pick up the magentas, from glowing hydrogen, and cyans, from oxygen being excited into shining by the shockwave created as the expanding cloud ploughs into the surrounding interstellar gas.

The whole complex is called the Veil Nebula but the segment at right passing through the star 52 Cygni is called the Witch’s Broom Nebula.

I shot this from home a couple of nights ago during a continuing run of typically fine fall weather, which usually brings the best nights of the year for astronomy. For this shot I used a new Lunt 80mm apochromatic refractor on loan for testing. It works very well! This is a stack of five 15-minute exposures.