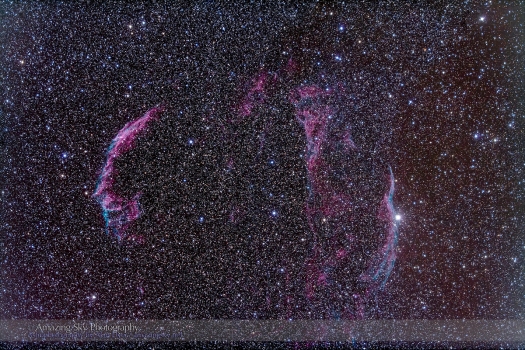 This is what’s left of a star that exploded thousands of years ago.

I shoot this object every year or two, so this is my 2013 take on the Veil Nebula. For last year’s see Star Death Site, a post from September 2012.

The Veil Nebula is a supernova remnant. The lacework arcs are what’s left of a massive star that blew itself to bits in historic times. This object, one of the showpieces of the summer sky for telescope users, is now high overhead at nightfall, off the east wing of Cygnus the swan.

I shot this a couple of nights ago using a 92mm-aperture refractor that provides a wide field of view to easily frame the 3-degree-wide extent of the nebula. The image is a stack of five 15-minute exposures with a filter-modified (i.e. red sensitive) Canon 5D MkII camera at ISO 800. Stacking the images helps reduce noise.

The colours in this object make it particularly photogenic, with a contrast of magenta and cyan. At right, a sharp-edged area of obscuring interstellar dust tints the sky brown and dims the stars.

One Reply to “The Veil Nebula in Cygnus”