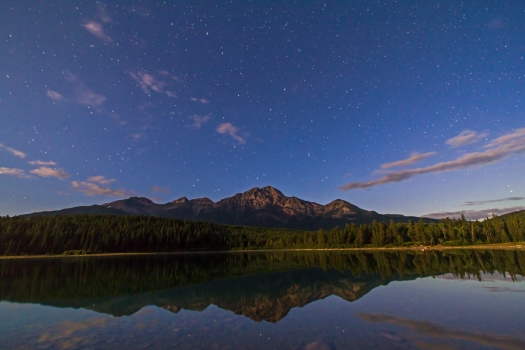 Pyramid Mountain is Jasper’s iconic peak dominating the skyline of the mountain town in Alberta. The mountain and its foreground lakes are ideally placed for nightscapes of the northern sky.

I took this shot Saturday night, July 28, from the shore of Patricia Lake, one of several that dot the benchlands south of Pyramid Mountain. Small lakes like Patricia have the benefit of often being calm and reflective. Here the stars of the Big Dipper and Ursa Major swing over top of Pyramid Mountain, in the blue moonlit sky. A few well-placed clouds add a welcome perspective. This is one frame of 150 or so in a time-lapse sequence, and that will eventually become a star trail composite as well. But this single frame stands well all on its own.

The last time I was here shooting this same scene I was using Ektachrome and Fujichrome film (each had its unique characteristics, though just what I can’t recall!). That was more than a decade ago. This digital shot with the Canon 7D looks far better than what I got back then.