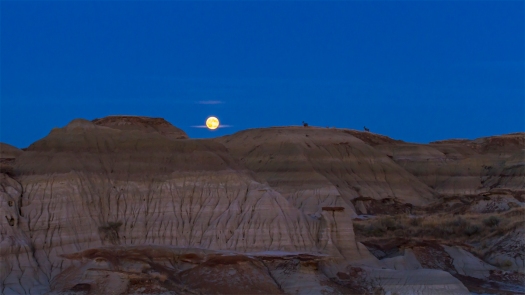 The Moon rises over a lunar-like landscape on Earth.

Well not quite. The badlands of Dinosaur Park, Alberta may look desolate but they were created by forces the Moon has never seen, namely water erosion. And they are “bad” only because we can’t farm them. But to the deer wandering across the top of the hill – and perhaps gazing at the Moon, too – the badlands are a fine place to live.

I shot this image as part of 600-frame time-lapse movie of moonrise, on September 30, the night that produced images for my last few posts. It was a very good night indeed.

One Reply to “Moonrise on the Badlands”