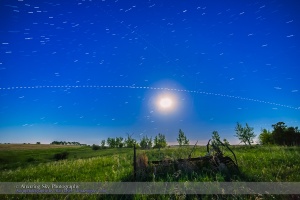 The Space Station is now continuously lit by sunlight, allowing me to capture dusk-to-dawn passages of the ISS.

On the night of May 31/June 1 I was able to shoot four passages of the International Space Station on successive orbits, at 90-minute intervals, from dusk to dawn. 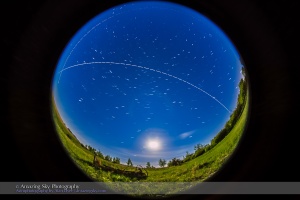 Then at 12:45 a.m. the Space Station came over again, now directly overhead. It’s the image above. The Moon is the bright glow at bottom. 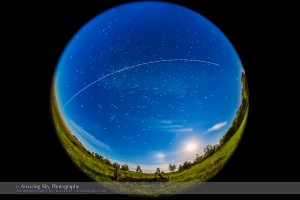 One orbit later, at 2:21 a.m., the Station came over in another overhead pass in the bright moonlight. 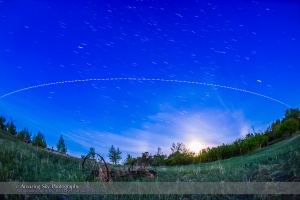 The final passage of the night came at 3:55 a.m. as the sky was brightening with dawn twilight and the Moon was setting. This was another passage across the south, and made for the most photogenic pass of the night.

Here’s an edited movie of the four passes, with a little music just for fun.

Seeing the Space Station on not one but two, three, or even four orbits in one night is possible at my latitude of 50 degrees north around summer solstice because the Station is now continuously lit by sunlight — the Sun never sets from the altitude of the ISS.

When the ISS should be entering night, sunlight streaming over the north pole still lights the Station at its altitude of 400 km.

To shoot the time-lapse clips and stills I used 8mm and 15mm fish-eye lenses, and a 14mm ultra-wide lens.

The bright moonlight made it possible to use short 2- to 4-second exposures, allowing me to record enough frames at each passage to make the little movies of the ISS flying across the sky. Keep in mind, to the eye, the ISS looks like a bright star. Some image processing trickery adds the tapering trails.

I used the Advanced Stacker Actions from StarCircleAcademy.com to create the trail effects, and to stack the time-lapse frames into single composite still images. The gaps in the trails are from the one second interval between frames.