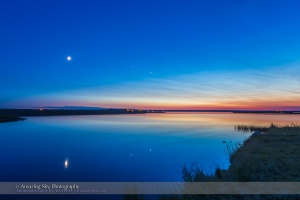 What a magical night this was. The evening started with the beautiful sight of the waxing crescent Moon lined up to the left of the star Regulus, and the planets Jupiter and Venus (the brightest of the trio), all set in the late evening twilight.

They are all reflected in the calm waters of a prairie lake.

I shot the above photo about 11 p.m., as late a twilight as we’ll get. From here on, after solstice, the Sun sets sooner and the sky darkens earlier. 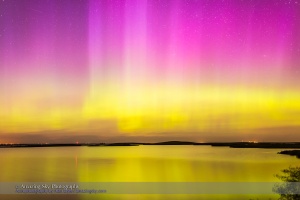 Later, about 12:30 a.m., as predicted by aurora apps and alert services, a display of Northern Lights appeared on cue to the north. It was never very bright to the eye, but the camera nicely picks up the wonderful colours of a solstice aurora.

At this time of year the tall curtains reaching up into space catch the sunlight, with blue tints adding to the usual reds fringing the curtain tops, creating subtle shades of magenta and purple.

The display made for a photogenic subject reflected in the lake waters.