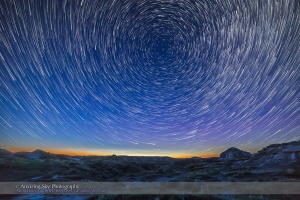 The stars circle the bright northern sky at solstice time over the Alberta Badlands.

I spent the evening and well into the night on Monday shooting at a favourite spot, Dinosaur Provincial Park in southern Alberta. The result of about an hour of shooting around midnight is the circumpolar star trail composite at top.

It shows the stars spinning about Polaris, while the northern horizon is rimmed with the bright glow of all-night twilight.

Particularly bright in the northwest are noctilucent clouds low on the horizon. These are high-altitude clouds near the edge of space catching the sunlight streaming over the pole at this time of year. 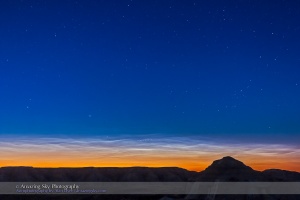 They are a phenomenon unique to the weeks around solstice, and for our latitudes on the Canadian Prairies.

The close-up shot above shows their intricate wave-like formation and pearly colour. They faded though the night as the Sun set for the clouds. But they returned in the pre-dawn light.

If you live at mid-northern latitudes, keep an eye out for these clouds of solstice over the next month. It’s now their peak season.