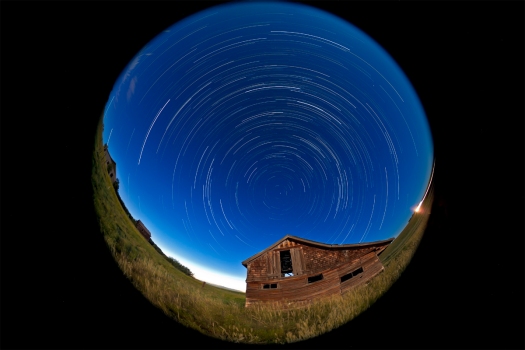 It has been an incredible week for imaging. Clear skies and a bright Moon are the tickets to nightscape photography. And in the last week we’ve had clear moonlit nights in abundance.

I’ve taken advantage of the run of great weather to shoot an old farmstead down the road from my house, on several nights. This is a shot from the first night out, on Thursday, July 14. It is a fish-eye lens shot taking in most of the sky, and looking north at the bottom of the frame. The star trails, taken over 2 hours, circle around the North Star (or close to it).

So why is the sky blue? The Full Moon, just out of the frame at top, is illuminating the landscape and sky — and light from the Full Moon is the same colour as light from the Sun (because that’s what moonlight is! — reflected sunlight). It’s just that moonlight is much dimmer. Expose long enough and you get a scene that looks like daylight but has the stars in it.

To create this image I took 400 18-second exposures, taken 1 second apart, using the Canon 5D MkII camera at ISO 800 and the Sigma 8mm lens at f/5. I stacked the images using an automated “action” for Photoshop developed  by astrophotographer Chris Schur. The original frames can also be strung together in sequence to create a time-lapse movie of the sky turning, suitable, in this case, for projection in a full-dome digital planetarium. I’ll post some of those shortly.

But after several nights of shooting till 3 and 4 a.m., and accumulating 100 gigabytes or more of RAW files, it’s time to take a night off and turn in early! At 1 a.m.!