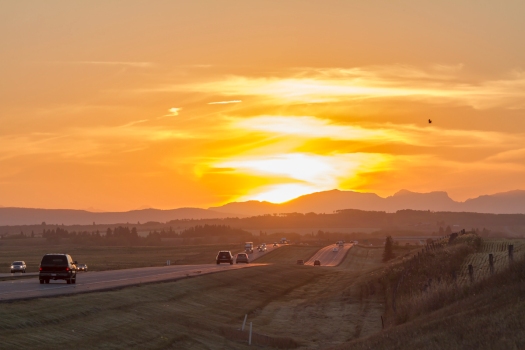 At equinox the Sun sets due west and shines into the eyes of drivers heading west into the sunset.

This was the scene Friday night on Highway 1, heading to Banff out of Calgary. I set up beside the highway to catch the scene of the Sun going down at the end of the road. I was hoping for more smoke and haze to dim the Sun to a clearly defined disk rather than deal with a bright glow. But you shoot what the sky gives you.

This is one frame from a 315-frame time-lapse movie of the traffic madly moving down Highway 1 (a true to life recording!) and the Sun glow setting behind the Rockies.