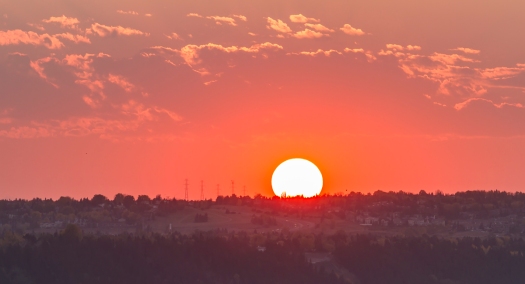 Smoke reddened the Sun and turned it into a ball of fire setting into the west.

This was Monday night, September 24, looking toward the hills in the west end of Calgary. I positioned myself on the north side of the Bow River across from the downtown core, at the top of the river valley to catch the Sun in this telephoto shot. The other camera was taking a time-lapse sequence in a wider scene with the Bow River in view.

We are certainly having some fine sunsets of late, thanks to forest fire smoke.