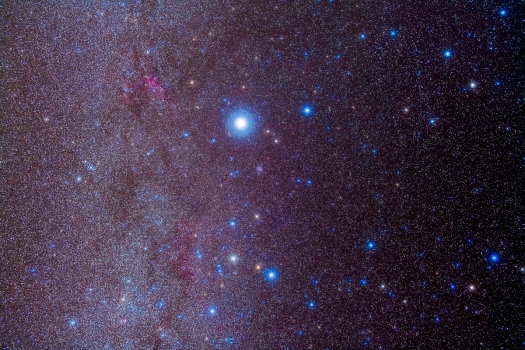 Shining in the southern sky these nights are the stars of Canis Major, the big hunting dog of Orion the Hunter. Among them is the famous Dog Star, Sirius, the brightest star in the night sky.

Can you see a dog outlined in stars? Sirius marks his head – or it is sometimes depicted as a jewel in his collar. His hind legs and tail are at the bottom of the frame.

I shot this earlier this month from Australia, where Sirius and Canis Major stand high overhead. From northern latitudes you can see these stars due south low in the sky about midnight. Sirius is hard to miss, often sparkling through many colours as our atmosphere distorts its light. But as the photo shows, it is really a hot blue-white star. While it is intrinsically a bright star, much of its brilliance in our sky comes from its proximity, only 9 light years away from us.

For this portrait of the celestial canine I used a 50mm “normal” lens. The atmosphere provided some natural haze this night, to add the glows around the stars accentuating their colours.

This area of sky also contains several nebulas, notably the red arc of the Seagull Nebula to the left of Sirius. Below Sirius you can also see the star cluster Messier 41, a good target for binoculars.

Toward the left edge of the frame you can see a pair of star clusters, Messier 46 and Messier 47, two other excellent binocular objects in the Milky Way, which runs down the frame to the left of Canis Major. The dog is just climbing out of the Milky Way after a swim in this river of stars.

One Reply to “Canis Major and the Dog Star”