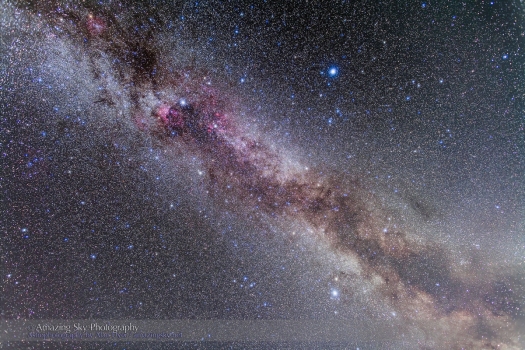 The trio of Summer Triangle stars flank the Milky Way in the dying days of summer.

I shot the featured image above two nights ago on a perfect late summer night from home. Skies were dark and transparent, with no aurora and little airglow to taint the sky.

The image takes in the Summer Triangle stars of Vega (top), Deneb (left) and Altair (bottom). Vega and Altair straddle the summer Milky Way, but Deneb lies right in the thick of it, way down the Local Arm that we live in. Vega and Altair are nearby normal stars, only 25 and 16 light years away. But Deneb is a blue supergiant, shining from 1400 light years away, and one of the most luminous stars in the catalog.

The Milky Way through this area of sky is riven by twisting lanes of interstellar dust. A particularly dark patch sits above Deneb at top left. Then below Deneb the Milky Way gets split by the Great Rift that continues down into Aquila and Ophiuchus at lower right.

All along this part of the Milky Way, particularly around Deneb, the camera picks up a string of glowing red nebulas where stars are forming. The red comes from hydrogen atoms emitting deep red light, as hydrogen is wont to do.

This image is from a couple of nights earlier. I used a wider angle lens to take in the full sweep of the summer Milky Way, from Sagittarius skimming the horizon, to Cassiopeia past the zenith at the top. You can see the Summer Triangle in the top half of the image, the part of the sky now overhead on early September nights from the northern hemisphere.

I took both shots with a filter-modified Canon 5D MkII placed on a little iOptron SkyTracker for tracked long exposures (4 to 5 minutes). The main image was with a 24mm Canon lens, the bottom image with a 14mm Rokinon lens.

2 Replies to “The Summer Triangle Stars”