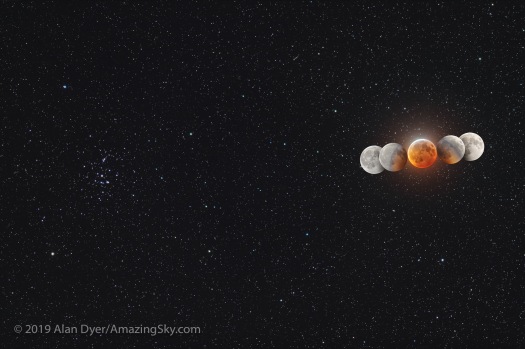 It took a chase but it was worth it to catch the January 20, 2019 total eclipse of the Moon in the winter sky.

While the internet and popular press fawned over the bogus moniker of “Super Blood Wolf” Moon, to me this was the “Cold Moon” eclipse. And I suspect that was true for many other observers and eclipse chasers last Sunday.

Total solar eclipses almost always involve a chase, usually to far flung places around the world to stand in the narrow shadow path. But total lunar eclipses (TLEs) come to you, with more than half the planet able to view the Moon pass through the Earth’s shadow and turn red for several minutes to over an hour.

The glitch is clouds. For several of the last TLEs I have had to chase, to find clear skies in my local area, creating pre-eclipse stress … and post-eclipse relief!

That was the case for the January 20, 2019 total lunar, as the weather predictions above, based on Environment Canada data, were showing east-central Alberta along the Saskatchewan border as the only clear hole within range and accessible.

The above is a screen shot from the wonderful app Astrospheric, a recommended and great aid to astronomers. In 2014, 2015, and 2018 the Environment Canada predictions led me to clear skies, allowing me to see an eclipse that others in my area missed.

So trusting the predictions, the day before the eclipse I drove the 5 hours and 500 km north and east to Lloydminster, a town where the provincial border runs right down the main street, Highway 17.

The morning of the evening eclipse, I drove up and down that highway looking for a suitable site to setup. Scenery was not in abundance! It’s farm land and oil wells. I settled for a site shown above, an access road to a set of wells and tanks where I would likely not be disturbed, that had no lights, and had a clear view of the sky.

The image above is from the iOS app Theodolite, another fine app for planning and scouting sites, as it overlays where the camera was looking.

Scenery was not a priority as I was mostly after a telephoto view of the eclipsed Moon near the Beehive star cluster. Wide views would be a bonus if I could get them, for use in further ebook projects, as is the plan for the image below.

The site, which was east of the border in Saskatchewan, served me well, and the skies behaved just as I had hoped, with not a cloud nor haze to interfere with the view. It was a long and cold 5-hour night on the Prairies, with the temperature around -15° C.

It could have been worse, with -25° not uncommon at this time of year. And fortunately, the wind was negligible, with none of the problems with frost that can happen on still nights.

Nevertheless, I kept my photo ambitions in check, as in the cold much can go wrong and running two cameras was enough!

Above was the main image I was after, capturing the red Moon shining next to the Beehive star cluster, a sight we will not see again for another 18-year-long eclipse “saros,” in January 2037.

But I shot images every 10 minutes, to capture the progression of the Moon through the shadow of the Earth, for assembly into a composite. I’d pick the suitable images later and stack them to produce a view of the Moon and umbral shadow outline set amid the stars.

Above is the final result, showing the outline of the circular umbral shadow of the Earth defined by the shadow edge on the partially eclipsed Moons. The umbra is about three times the size of the Moon. And at this eclipse the Moon moved across the northern half of the shadow.

I usually try to take a “trophy” shot of the successful eclipse chaser having bagged his game. This is it, from mid-eclipse during totality, with the red Moon shining in the winter sky beside the Beehive.

With that tally I’ve seen all the locally visible TLEs over a full saros cycle, 18 years. The last local TLE I missed was January 20, 2000, exactly 19 years — a Metonic cycle — ago. It must have been cloudy! The next total eclipse of the Moon is May 26, 2021, visible from Alberta as the Moon sets at dawn. I’d like to be in Australia for that one (depicted above in a screen shot from StarryNight™), to see the eclipsed Moon beside the galactic centre as both rise in the east, a sight to remember. Being late austral autumn, that will be a “cool Moon.”

3 Replies to “Chasing the Eclipse of the Cold Moon”