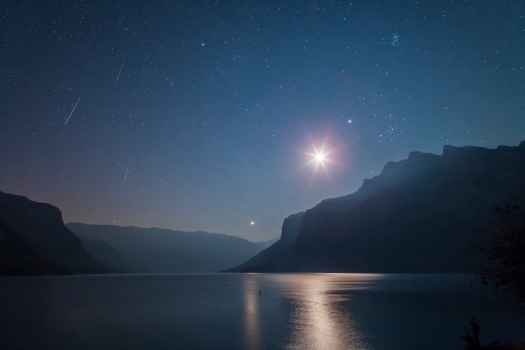 It was quite a night, and a wonderful dawn. This was the scene at the end of a night of falling stars.

A trio of Perseid meteors zips down at left, while at right a trio of solar system worlds rises into the pre-dawn sky. The overexposed waning Moon is flanked by Jupiter above and Venus below. Jupiter shines near the Hyades star cluster and below the Pleiades cluster.

I took this shot (it is actually a composite of three shots, each with its own meteor) on the morning of Sunday, August 12 on the peak night of the annual Perseid meteor shower, widely publicized this year due to the lack of a Moon for most of the night, and the convenience of falling on a weekend. The scene is looking east over Lake Minnewanka in Banff National Park, Alberta, one of the few places in this part of the Rockies you can look east to a reasonably unobstructed sky.

Notice the glitter path on the water from not only the Moon but also Venus.

One Reply to “Perseid Meteors and Planets over a Mountain Lake”

Join 8,521 other followers
Follow The Amazing Sky on WordPress.com