The Northern Lights danced all night, as Earth was buffeted by winds from the Sun.

As soon as I saw the warning notices at Spaceweather.com I was hoping we would be in for a wonderful night of aurora watching. I wasn’t disappointed.

Forewarned, I headed out to the Wintering Hills Wind Farm near my home in southern Alberta. I thought it would be neat to get shots of the effects of the solar wind from beneath and beside the wind turbines of the farm. The shot above is from a time-lapse movie taken with a fish-eye lens that will look great when projected in a full-dome digital planetarium. 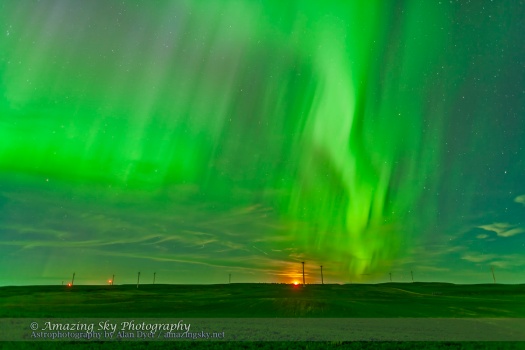 I shot with three cameras, with two aimed east to where the brightest part of the auroral arc usually sits. It was also exactly where the Moon would rise after midnight. This shot, above, captures the scene right at moonrise, which was also right when the aurora kicked into high gear as a sub-storm of solar particles rained down on our upper atmosphere. The ground lit up green with the glow of oxygen in the mesosphere, some 100 kilometres up. 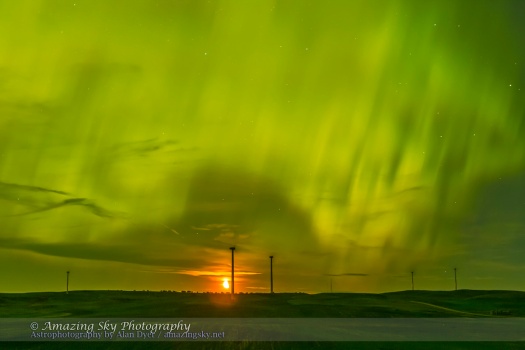 This shot, taken moments later with a longer focal length lens, grabs the waning Moon shining behind the distant wind machines, and beneath the arc of auroral curtains.

In all, I shot 50 gigabytes of raw images, both still images and frames for time-lapse movies. I’ve assembled most of them into a musical collage that honours the night. In the final sequence of the movie, it almost looks like the wind machine is facing into the brunt of the solar wind, as pulses of aurora surge from out of the east toward the turbine towering overhead.

The music is by a new favourite artist of mine, the Italian composer Ludovico Einaudi. His latest album of alt-classical/new age music is called “In a Time Lapse.” How could you not like that?! Buy it on iTunes. It’s stunning.

I hope you got to see the Night of the Northern Lights in person. If not, I trust these images and movies give you a sense of the wonder of what the solar wind can do.

4 Replies to “Night of the Northern Lights”