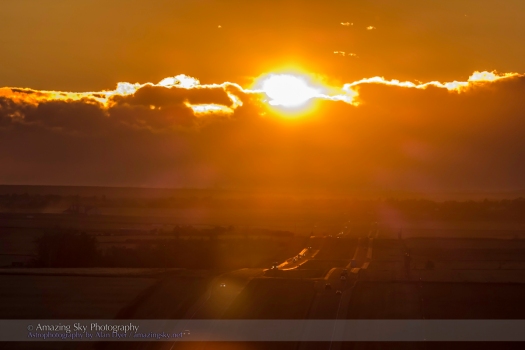 Highway One heads into the setting equinox Sun.

I try for this shot every year, and every year I’m thwarted by low clouds over the Rockies to the west.

So here’s the shot from tonight, Monday, September 23, the night after equinox. Had the horizon been perfectly clear tonight the Sun would have appeared right at the end of the Trans-Canada Highway as it set behind the Rockies. Instead, it disappeared higher up and to the left, behind low cloud.

At equinox (fall or spring) the Sun rises due east and sets due west. So tonight, it was shining into the eyes of all the drivers as they headed west into Calgary – a little demonstration of the annual motion of the Sun.

The previous night, Sunday, Sept. 22, I shot a time-lapse movie of the scene, again hoping for a clear shot to the setting Sun. Alas! A neat movie but still not quite what I was after.

There’s always 2014. But I think I need to aim east and catch the rising Sun at equinox instead. The mountains attract too many clouds.