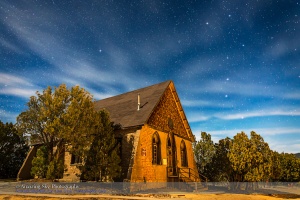 The Big Dipper and the Pole Star shine above the moonlit historic Hearst Church.

Tuesday was a productive evening of shooting in the moonlight. One of the best from the night pictures the Hearst Church in the rustic town of Pinos Altos in the Gila Forest of southern New Mexico.

The Big Dipper stars shine at right, with the Pointer stars in the Bowl aiming at Polaris above the Church. Illumination is from a waxing quarter Moon and from some decorative lights in the yard next door across the street.

The Hearst Church was opened in May 1898 and indeed is named for the famous Hearst family. Money to build the church was raised by the local mining families with a major donation from Phoebe Hearst, wife of the mining magnate and senator George Hearst. Phoebe was also mother to newspaper tychoon William Randolph Hearst, the inspiration for Orson Welles’ movie Citizen Kane. Gold that decorates Hearst’s mansion in California came from the family mine near Pinos Altos.

As the mining boom went bust the Methodist church lost its pastor then its congregation. It is now an art gallery and home to the Grant County Art Guild. See their website for details on the historic church.

While I know many of my blog’s followers enjoy the photos for their own sake, lots of folks also like to learn more about the technical aspects of the images.

So with this blog, and selected others in future, I’ll present a bit more of the “how-to” information.

How the Image Was Shot and Processed

Taking the image could not have been simpler. It is a single 45-second exposure at f/2.8 with the 24mm lens and Canon 6D at ISO 800, on a static tripod, about as basic as you get for nightscape shooting. There is no fancy stacking or compositing.

The trick is still in the processing, however. Here is a breakdown of the Photoshop CC 2014 file and its various layers. Every aspect of the processing is non-destructive. No pixels were ever harmed in the process. Every adjustment can be tweaked and modified after the fact.

< Sharpening layer created from stamping the final layers into one layer using the Command-Option-Shift-E command, then a High Pass filter applied, blended with Soft Light and masked to sharpen just the ground.

< The base image, opened from the developed Raw file as a Smart Object, with noise reduction and sharpening applied as Smart Filters.

I know this won’t explain all the processing steps but I hope it provides some idea of what goes into a nightscape.

All this and much more will be explained in an upcoming half-day “Photoshop for Astronomy” Workshop I’m presenting Saturday, May 9. If you are in the Calgary, Alberta area, consider joining us. For details and to register, see the All-Star Telescope web page.

Also, my ebook featured below has all the details on shooting and processing images like these.