The Northern Lights dance over the badlands of Dinosaur Provincial Park, a World Heritage Site.

Aurora alerts called for a fine display on Friday, September 11. Forewarned, I headed to one of my favourite shooting spots at Dinosaur Provincial Park, and aimed three cameras at the sky. It didn’t take long before the lights appeared, right on cue.

The display started out with lots of promise, but did fade after 12:30 a.m., just when it was supposed to be peaking in intensity. I let the cameras run for a while but eventually stopped the shutters and packed it in…

…But not before I captured this odd bit of aurora in the east, shown below, that appeared as an isolated and stationary band pulsing up and down in brightness, but with little movement. 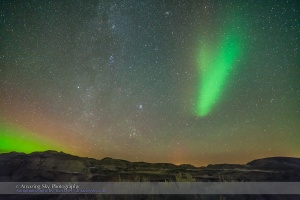 I’ve seen these before and have never heard a good explanation of what process creates such an effect, with a patch of sky appearing to “turn on” and off.

You can see the effect at the end of the time-lapse compilation, linked below from Vimeo.

As usual, please enlarge to full-screen and watch in HD for the best quality.

Unfortunately, a patrolling park official checking on things, spoiled some frames with her truck’s headlights. It’s one of the hazards of time-lapse imaging.

As a final image, here are all the fish-eye lens frames stacked into one image, to create a single star trail showing the sky rotating about the celestial pole.

It’s been a good week for auroras, with a promise of more to come perhaps, as we approach equinox, traditionally a good time for magnetic field lines to align, funnelling solar storm particles into our magnetosphere.

3 Replies to “The Dancing Lights over Dinosaur Park”