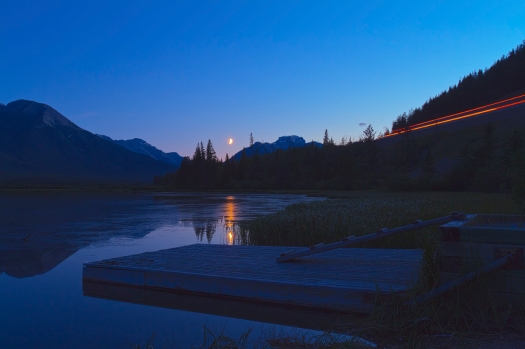 I’ve been chasing the Moon this week. I caught up with it last Thursday night, August 4, in Banff, with the waxing crescent Moon low in the southwest at dusk.

The location is the upper Vermilion Lake just outside the Banff townsite. The golden reflection of the low Moon on the water, the slope of the mountainside and its reflection, the dock and steps, and the tail lights from a vehicle on Highway 1 just up the hill (I decided to leave them in!) make for what I think is an interesting composition of converging lines.

I got set up and in position just in time to catch the scene at the magic hour of twilight, when the sky is dark enough the show deep colours and the Moon’s entire disk shows up, but before the sky gets too dark and the Moon too bright to make an interesting scene.

Even so, the contrast in such a scene is still very high. So to capture it more as your eye would have seen it I used a stack of five exposures, taken in rapid succession, each 2/3rds of an f-stop apart. I then merged the frames with Photoshop’s High Dynamic Range routine to create a scene that brings out detail in the foreground without overexposing the Moon and sky.

A technical method to capture a simple scene of serenity in the mountains.

One Reply to “Moon in the Mountains”