Look north in June and July from the Canadian Prairies and you are likely to see iridescent clouds shimmering in the mid-summer twilight.

It’s been a good couple of nights for sighting noctilucent clouds – literally “night shining” clouds, or NLCs. These are odd water vapour clouds that form at the edge of space 80 km up where no self-respecting cloud has a right to exist.

But there they are. Existing and moving in waves in a near vacuum.

We see them because at solstice time the Sun’s light pours over the pole (where the midnight Sun is shining) and lights up the clouds that hang over the Canadian Northwest Territories and Nunavut. 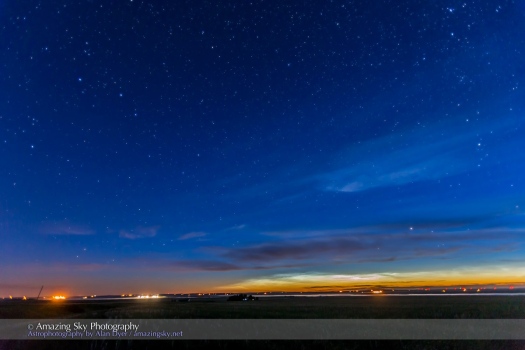 From the Prairies we see them far in the distance to the north, as here, shining low on the horizon amid the deep blues and reds of a perpetual twilight that never ends on our short summer nights.

The top photo, taken Saturday night, is a 5-section panorama with a short telephoto lens. The bottom image, taken early this morning, is just the opposite – a very wide angle shot showing the clouds in context, with the Big and Little Dippers at top left and centre.

Some images and movies from last year’s NLC season are in my blog post from June 27, 2013.

2 Replies to “The Clouds of Solstice Twilight Are Here!”