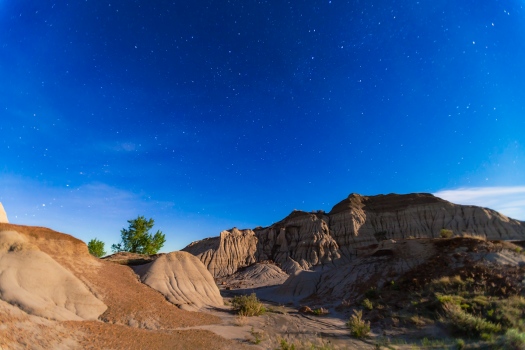 The stars shine in a bright moonlit sky over the Alberta Badlands.

My feature image above is one of several still frames I took at the end of 4-hour photo shoot last Sunday at Dinosaur Provincial Park. The nearly Full Moon provides the illumination on an eroded landscape originally cut by water from retreating ice age glaciers.

But the volcanic ash layers hold treasures much older, from 70 million years ago. This area contains the world’s richest collection of late Cretaceous fossils of dinosaurs and other flora and fauna from near the end of the dinosaurs’ reign.

The movie below is a 300-frame time lapse of the stars turning behind the hoodoos. It’s a dolly shot, using the Dynamic Perception Stage Zero rail and controller.

The system works very well, but such shots demand a site with a suitable immediate foreground, as well as a good view to the distant sky. It is the parallax motion between foreground and background that makes a dolly move interesting.

I planned this shot to begin at twilight and continue as the sky was darkening, then into the rest of the night with the Moon rising and lighting up the landscape. The moving clouds were perfectly timed and placed!

2 Replies to “Moonlight on the Hoodoos”